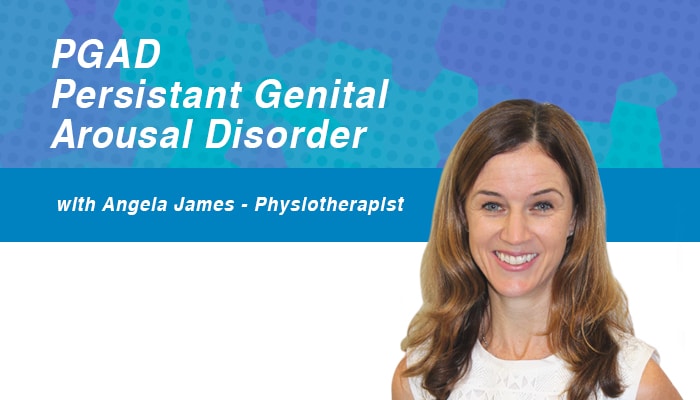 Persistent Genital Arousal Disorder (PGAD) is a condition that sits under the umbrella term of female pelvic pain, which we know affects up to 1 in 5 women.

PGAD is persistent, continuous and unwanted genital arousal unrelated to sexual desire. It is not relieved with orgasm and causes significant distress.

Like many female pelvic pain conditions, PGAD has not been well researched. In fact, PGAD wasn’t recognised as a medical condition until 2001 and it is thought many women didn’t report their symptoms due to embarrassment. This is unfortunate and certainly needs to change, as research-based knowledge underpins positive patient outcomes.

Therefore while there isn’t extensive data on the extent of PGAD suffering, it is evident that this condition has a huge impact on one’s quality of life.

Patients suffering with PGAD report their symptoms to be distressing, intrusive, unwanted and sometimes painful.

The following symptoms are often reported by patients suffering with PGAD:

Think about the sensation of constantly being on edge of sneezing, but never actually sneezing. Or constantly having a full bladder, but no relief with going to the toilet. PGAD is like that, but with a sensation of being on the edge of an orgasm which is not related to sexual desire. It is an extremely distressing condition and patients suffering with it have terrible trouble with focusing on anything else. PGAD has an enormous impact of people’s ability to cope and function with normal activities.

PGAD is thought to be a problem with the sensory nerves, blood flow or overactive pelvic floor muscles. We have clinically that the superficial pelvic floor muscles, especially the ischiocavernosus and a deep hip muscle, obturator internus, to be the main contributors to PGAD and clitoral pain (or clitoral priapism).  It may also be associated with pudendal nerve (PN) problems, as patients can report clitoral pain or irritation as one of their symptoms associated with PN. It has also been linked to psychological issues such as obsessive compulsive type thinking. PGAD has also been linked to Tarlov cysts found in the sacral nerve root, or neurological conditions such as Parkinson’s disease or Epilepsy.

But the answer is that not enough is known about the condition and every women is unique.

How Can Pelvic Physiotherapy Help?

Firstly, our team of specialised pelvic physiotherapists will listen to your story and ask you questions about your symptoms, bladder, bowel and sexual health. We will also ask you about your general health, including medical and surgical history, stress/anxiety levels and any other questions that may be relevant. This is to help us understand your symptoms and its impact on your life. Having a complete story will help us manage you holistically, as lifestyle factors influence your symptoms.

We will then perform an assessment of your pelvis, look at external features such as pelvic/hip alignment, flexibility, strength and specific neural tests. If appropriate we will perform an internal assessment (vaginal) to assess the pelvic floor muscles and the pelvic nerves. If you are uncomfortable with the notion of a pelvic floor examination, we can also assess this through an external ultrasound assessment.

From here, we are able to advise you on what musculoskeletal or neurological issues are  contributing to your PGAD symptoms, and formulate a personalised management plan to reduce symptoms and improve the quality of your life.

What is the Treatment for PGAD?

Although research has not resulted in a ‘gold standard’ approach to managing PGAD, we have found the following treatments really helpful for patients suffering with PGAD:

There may be a need to use medications to assist your healing and recovery, but we will discuss this on an individual basis.

This article was brought to you by Angela James. Angela is the Principal Physiotherapist at Sydney Pelvic Clinic. Learn more about Angela and our team here.